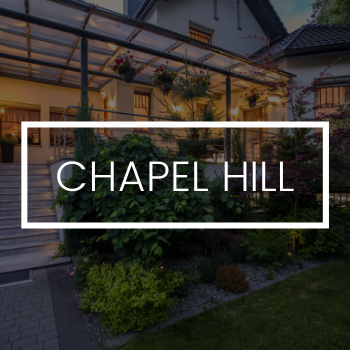 The Town of Chapel Hill makes up the corner of the North Carolina area traditionally known as “The Triangle”. The next point is Durham, and at the southeast corner is Raleigh, the state capitol. With a population of more than 59,240, Chapel Hill is the 16th largest municipality in the state.

The town started with a real chapel, on a real hill. Originally, there was a small Anglican “chapel of ease,” which was built in 1752. The location was a crossroads, on an important hilltop, meant as a rest stop for weary parishioners on their long journey to the main church in Hillsborough. The town grew up around the chapel, and continued growing along with the expanding University of North Carolina. Chapel Hill was chartered in 1851, naming its main thoroughfare, Franklin Street, after Benjamin Franklin.

Although part of a now bourgeoning region, and holding a key position in the Triangle, Chapel Hill retains its small-town feel. In 2009, Chapel Hill ranked number three on the list of “Top 25 Most Uniquely American Cities and Towns”. The quintessential college town, Chapel Hill is notable for its scenic beauty, classic culture, southern hospitality and the states best public schools. The town, aka “Blue Haven”, is home to highly advanced medical care from UNC-Hospitals.